You are here: Home / Archives for The Clash and Celebration of American Culture 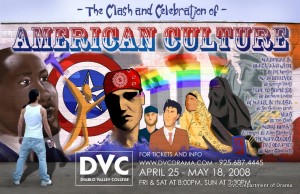 A series of seven plays representing the clash of American identities in the 21st century: Molly Brant: A Play in Voice by Alan Steinberg — Native American Molly Brant’s attempts to motivate her tribe to hold on to their ancestral land. The Miraculous Day Quartet by Mary Steelsmith — four people simultaneously tell their excuses Read More»