You are here: Home / Archives for Richard III 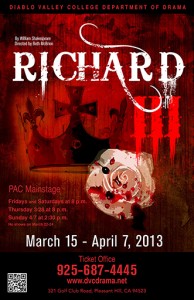 After a long civil war between the royal families, England enjoys a period of peace under King Edward IV, but Edward’s younger brother, Richard, resents Edward’s power. Malicious and bitter about his physical deformity, Richard begins to aspire secretly to the throne, and decides to kill anyone who will stand in his way. In RICHARD Read More»